ICANN 22nd Annual General Meeting is an annual meeting held during the 69th ICANN Meeting. In this session, 45 community leaders were commended for their extraordinary commitments and contributions to the development of ICANN's multistakeholder model.

Hotta was commended as one of the community leaders in ccNSO[*1]. He had been a Council member of ccNSO since its inception in 2004, and he had contributed to the cutting-edge activities of ccNSO until he stepped down from the Council at the 67th ICANN Meeting in 2020. This recognition honors his 16 years of continuous contribution to the ccNSO community.

JPRS has contributed significantly to ccNSO activities since the preparatory stage for the establishment of ccNSO in 2004, as a registration management organization for ".jp", a ccTLD assigned to Japan.

The fact that JPRS has demonstrated its presence and led the way in various situations in the ccTLD community is reflected in JPRS's past activities.

In addition, JPRS was among the first to introduce Internationalized Domain Names (IDN) into the JP domain name service, and in 2004, it was one of the first TLDs in the world to fully support IPv6. This has made great strides for IPv6 deployment in the world.

By sharing the lessons learned from these pioneering efforts with other ccTLD registries, JPRS has made a significant contribution to the Internet community as well as the ccTLD community, and Hotta has been at the forefront of the global stage.

In response to the award, Hotta made the following statement: "I believe that this award is a representation of my contribution to the Internet, which I have made with our company, my friends in Japan and around the world. I will continue to contribute." 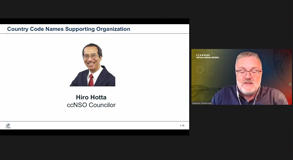 JPRS will continue to support and be engaged in the ICANN's multistakeholder process and contribute to the sound development of the Internet in the future.