Japan Registry Services Co., Ltd. (JPRS: Chiyoda-ku, Tokyo; President Koki Higashida) today announced that Mr. Fadi Chehade, President and CEO of the Internet Corporation for Assigned Names and Numbers (ICANN) and other officials visited JPRS on Feb. 19 2013. During the visit, ICANN officials expressed approval of the partnership with JPRS in activities in the Asian region and Japan. JPRS agreed on further cooperation with ICANN to reinforce links with local communities in the future.

ICANN is a private sector, non-profit organization established in 1998 to coordinate infrastructure resources for the Internet, such as domain names, IP addresses, protocols and root servers. JPRS has actively participated in the establishment of ICANN since the beginning and has investigated various policies and guidelines. JPRS has supported private-sector-driven Internet resource management and coordination centering on ICANN. In 2002, JPRS signed the "ccTLD Sponsorship Agreement (.jp)" with ICANN to manage and administer the .jp top level domain for the Internet community in Japan.

Since Mr. Chehade assumed the office of President and CEO of ICANN in September 2012, ICANN has established a policy of enhancing links with local Internet communities in various regions throughout the world. As a partner for enhancing ICANN activities in the Asian region and Japan, ICANN visited JPRS which has managed and administrated the domain names and operated the Domain Name System (DNS) in Japan for long time.

During this recent visit, ICANN officials expressed their appreciation for JPRS's contributions to the Internet overall, including the company's participation in various ICANN activities, deployment of the latest technologies such as Internationalized Domain Names, IPv6, and the DNSSEC, and efforts toward ensuring stable DNS operations. The officials also expressed their expectations for JPRS to play a large role in further enhancing ICANN's activities in the Asian region and Japan, and JPRS agreed on responding to these expectations.

JPRS will continue to support the private-sector-led Internet resource management organization under ICANN and contribute to the sound development of the Internet in the future. 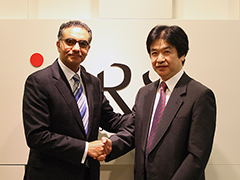 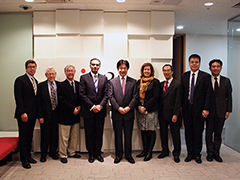